This article provides an overview of Vietnam for those keen on exploring the possibility of living and working there. The information presented is gathered from open sources and is not exhaustive or meant to supplement or substitute legal and professional advice.

Vietnam, a strip of land shaped like the letter “S”, lies on the eastern part of the Indochinese peninsula. It is bordered by China in the north, Laos and Cambodia to the west, the East Sea to the east and the Pacific Ocean to the east and south. Three quarters of its territory comprise mountains and hills and it has a 3,260 km long coastline.10 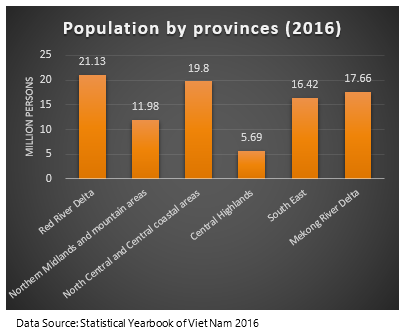 In 2016, the service sector accounted for 40.92 percent of the economy while the industry and construction sector comprised 32.72 percent. The agriculture, forestry and fishery sector made up 16.32 percent and the taxes on products (less subsidies) contributed 10.04 percent.14

Some key industries in Vietnam include infrastructure, manufacturing, retail, and food and agriculture. To support its fast-growing economy, Vietnam increased its infrastructural projects, whose financing had traditionally relied on international developmental aid. Now, the financing model is moving towards public-private partnerships (PPPs) that operate under contracts modelled after standard international project agreements. The government is also reforming and equitising State-Owned Enterprises (SOEs), thereby opening up certain industries traditionally monopolised by SOEs to the private sector.15

The majority of Vietnam’s manufacturing is primarily located in southeast Vietnam and the Red River Delta in the northeast. Prominent manufacturing sectors in Vietnam include textile, garments, furniture and electronics. While Hanoi and Ho Chi Minh City have been important industrial centres, other provinces such as Binh Duong, Dong Nai, Hai Phong and Bac Ninh are also seeing an increased MNC presence. Renowned international firms such as Samsung Electronics, Intel and Siemens have also set up factories in the country.16

Vietnam is renowned globally for its agricultural produce and seafood resources which is exported internationally. Foreign firms like Olam, Wilmar, Marubeni and CP Group have established their presence in Vietnam to grow the food and agribusiness value chain.17

The rising disposable incomes and growing consumer brand awareness has led to a demand for retail products among the Vietnamese. International investors such as Keppel Land’s Saigon Centre, Mapletree’s Vivocity and Japan’s Aeon Mall have opened malls to capture this growing market. Demand for imported consumer goods and services is still concentrated in larger cities like Ho Chi Minh City and Hanoi where incomes are considerably higher than the national average.18

Tourism contributes greatly to Vietnam’s economic growth. The popular destinations include Ha Long Bay in north Quang Ninh province, Phu Quoc island in southern Kien Giang province and Nha Trang in the central coastal province of Khanh Hoa.19 Vietnam offers various kinds of attractions ranging from cultural tourism, sea tourism, natural and ecological tourism as well as sports and recreation tourism.20 In 2017, the tourism sector is expected to earn a revenue of VND500 trillion (US$22 billion).21 According to the resolution issued by the Politburo, tourism will become a spearhead economic sector in the next four years, with an annual target of 17–20 million international and 82 million domestic tourists and revenue forecast of US$35 billion by 2020.