This article provides an overview of Brunei for those keen on exploring the possibility of living and working there. The information presented is gathered from open sources and is not exhaustive or meant to supplement or substitute legal and professional advice.

Brunei Darussalam is located at the northwestern part of the island of Borneo, facing the South China Sea and surrounded by East Malaysia.4 Oil and gas has been the backbone of the country’s economy since its discovery in 1929.5 The country’s culture is deeply rooted in its Malay origins. These are reflected in its language, architecture, ceremonies and customs.6

Brunei’s commitment to continued prosperity and stable macroeconomics is underscored by Wawasan 2035, its government’s national vision.7 Wawasan 2035 provides for the promotion of investments both in downstream industries and economic clusters beyond the oil and gas industry.8 It comprises 13 strategies that include education, political stability and security, institutional development, local business development, infrastructure, social security, and environment.9 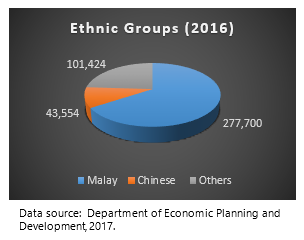 Brunei’s foreign direct investment (FDI) totalled BND238.2 million in 2015. Singapore contributed the largest share of total investment with BND69.2 million (29 percent). This is an increase from the BND62 million recorded the previous year. Mining and quarrying sector was the largest recipient of FDI inflows in 2015 which amounted to BND244.2 million, followed by construction at BND12.3 million and financial and insurance activities at BND5.1 million.12

One of the Singapore companies in Brunei is Ley Choon Group Holdings Ltd, which “secured BND29.6 million worth of new contracts for the construction of a flyover bridge at Jalan Gadong, Jalan Telanai, Brunei and for infrastructure works involving the supply and installation of sewerage systems at Berangan, Kianggeh and Subok” in 2013.13 In 2010, ST Engineering secured a S$66.5 million project in Brunei to design and construct a waste management facility in Sungai Paku.14 Greatearth Construction Pte Ltd, through its subsidiary in Brunei, Greatearth (B) Sdn Bhd, has “an extensive track record in housing and infrastructure projects”.15

The energy sector – which includes oil and gas exploration and production, petrochemical and refineries, fuel, power, energy efficiency and conservation and renewable energy – is a core pillar of Brunei’s economy. A significant contributor to the government’s revenue, the energy sector also spurs development in other sectors of the economy.16

In 2016, the agriculture, forestry and fishery sectors declined by 3.6 percent, largely due to the 12.9-percent decline in fishery. The industrial sector posted a negative growth of 2.9 percent due to a fall in all its sub-activities, except for electricity and water, which increased by 4.8 percent. The services sector also fell by 1.6 percent in 2016, which resulted from decreases in wholesale and retail trade (3.5 percent), land transport (10 percent), water transport (9.5 percent), other transport services (15.2 percent), hotels (6.9 percent), restaurants (0.9 percent), health services (2.4 percent), education services (4.7 percent), business services (12.6 percent), other private services (7.8 percent), and government services (2.7 percent). Service activities that posted positive growth were air transport, communications, finance, real estate and domestic services.17

To boost tourism, the country is focusing on strengthening the attractiveness and diversity of its tourism products and improve the quality of tourism services. To this end, it is working on refining existing tourist destinations such as Temburong, Bandar Seri Begawan, Kampong Ayer, Tutong, Belait, and other recreational destinations including its beaches, forests and parks. Brunei is also enhancing some activity-based products such as diving and birdwatching, as well as community-based tourism such as homestays and village activities.20