This article provides an overview of Thailand for those keen on exploring the possibility of living and working there. The information presented is gathered from open sources and is not exhaustive or meant to supplement or substitute legal and professional advice. 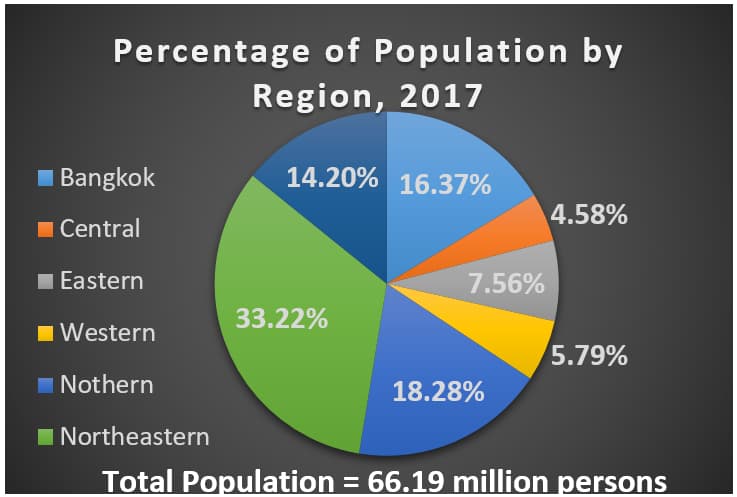 Thailand has a mixed economy with the major economic sectors being agriculture, industry, tourism, service and natural resource. Its economy has rebounded from the numerous incidents of political unrest. Its GDP in 2017 was 15,450.1 billion baht.12 Its economic growth sectors include tourism, automotive and food manufacturing, which are supported by its well-developed transportation system, infrastructure and communications systems.13

A leading exporter of rubber, Thailand also exports crops such as rice, vegetables and fruits. It is also famous for its livestock exports, as well as exports of freshwater fish and marine fishery. Its industrial exports include agro-industry, textile, electric appliance and automobiles. Important natural resources like limestone, gypsum, glass, sand, marble, tin and natural gas also contribute to the economy.14

Singapore and Thailand share a bilateral network known as the Singapore-Thailand Enhanced Economic Relationship. This is a platform for government agencies and private sectors to promote closer economic cooperation and deepen the level of contact and consultative process between the two countries.15

Thailand is the second-largest consumption market in Southeast Asia. Its people spend around half of their average household income on food and beverage, and retail consumption. Spending is also high for leisure activities and luxuries.17

The Thai automotive industry is a key node in the world’s auto production supply chain, with around half of the world’s top 100 auto parts manufacturers and multinational auto companies – including GM, Isuzu, Mercedes-Benz and Toyota – having operations there. Thailand is also a food production hub with stringent food manufacturing standards and halal food accreditation.18

Thailand is home to Buddhist temples, exotic wildlife and spectacular islands. It is also known for its fascinating history, unique culture and delectable local food.19 The tourism industry contributes an estimated nine to 10 percent to the national GDP, though this is less than contributions from the service and manufacturing industries. The tourism sector not only depends on foreign visitors but also domestic tourists whose number dwarfs that of foreign tourists.20 In 2017, Thailand had 35,381,210 visitors – a large proportion of whom were on holiday, followed by visits for meetings, incentives, exhibitions, conventions and other purposes.21