This article provides an overview of Indonesia for those keen on exploring the possibility of living and working there. The information presented is gathered from open sources and is not exhaustive or meant to supplement or substitute legal and professional advice.

The Republic of Indonesia is located between the continents of Asia and Australia. It comprises 16,056 islands, with 34 provinces spreading over five main islands and four archipelagos. The five main islands include Sumatra, Java, Kalimantan, Sulawesi and Papua. The four archipelagos are Riau, Bangka Belitung, Nusa Tenggara, and Maluku. Papua (319,036.05 sq km) is the largest of the 34 provinces and the smallest is Daerah Khusus Ibukota (DKI) Jakarta (664.01 sq km).8

Apart from its vast territory, Indonesia has a dense population and is rich in natural resources. It is also rich in cultural diversity, with each region having its own unique cultural characteristics, local language, dance, custom and costume.9 On 2 October 2009, UNESCO inscribed Indonesian batik on its Representative List of the Intangible Cultural Heritage of Humanity.10 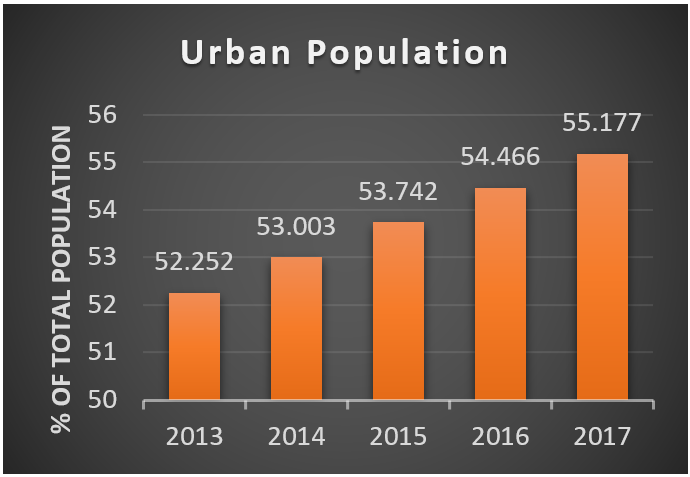 Indonesia is ASEAN’s largest economy.16 Its GDP in 2017 was IDR 13,588.8 trillion, a growth of more than nine percent from the IDR 12,406.8 trillion achieved in 2016.17 Since 2014, the Indonesian government has prioritised the development of infrastructure and industrial parks so as to promote the country as a manufacturing destination. These economic priorities are among the efforts made to revive the country’s economic growth prospects.18

Indonesia is the fourth-largest consumer market in the world, in terms of population size, behind China, India and the United States. Indonesia’s mushrooming middle class is also becoming a dominant force within its consumer market. In 2014, about 35 percent of its population (88 million people) were classified as middle-class and affluent consumers. By 2020, the percentage is expected to reach 53 percent (141 million). Their household expenditure, which includes food, utilities, transportation, communications and other regular household supplies, exceeded IDR 2 million per month per household in the same year.

Retail property developers, shopping malls and department stores are changing their overall shopping experience and product assortment to cater to the growing middle class. There has also been an influx of foreign investors such as Galeries Lafayette from France, Central from Thailand, Lotte from South Korea and Aeon and Sogo from Japan.19

Due to its location, Indonesia has a diverse landscape from “from the vibrant tourists’ paradises of Bali and Lombok to the mysteriously shrouded cultures of the Asmat in Papua and those who dwell the highlands of Toraja in South Sulawesi.” Apart from the natural landscapes, culturally it also offers a rich diversity of ancient temples and historical remnants, such as Borobudur Temple in Magelang, Central Java and the Prambanan Temple Compounds, which is located in Yogyakarta and is one of the biggest in Southeast Asia.

The island of Bali is also a popular beach holiday destination among tourists.20 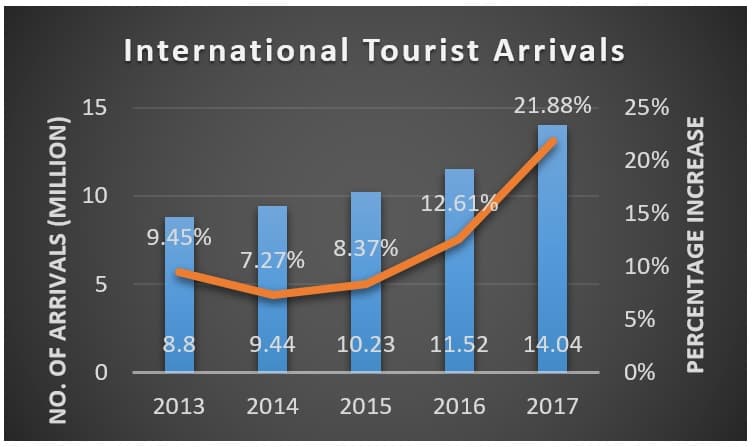 International tourist arrivals in Indonesia reached 14.04 million in 2017, up from 11.52 million recorded in 2016.21 The country is eager to grow its tourism sector to boost revenue and help it diversify its sources of economic growth, which is currently largely dependent on commodities.22 It has invested in infrastructure development to enhance connectivity, including the development of new airports and harbours and upgrading existing airports and air navigation facilities. Additionally, the government has also allowed visa-free access to 169 countries to attract foreign visitors.23

Indonesia also promotes itself as a key halal destination in the region by developing areas such as Banda Aceh, Aceh Besar, Sabang, and Lake Laut Tawar.24 Apart from luring Muslim tourists, it is also seeking to develop international medical tourism.25