This article provides an overview of Malaysia for those keen on exploring the possibility of living and working there. The information presented is gathered from open sources and is not exhaustive or meant to supplement or substitute legal and professional advice.

Malaysia comprises two regions: the Peninsular Malaysia and the states of Sabah and Sarawak.9 It is a multi-ethnic and multi-religious federation of 13 states and three federal territories. The 13 states are based on historical Malay Kingdoms, and nine of the 11 Peninsular states retain their royal families. The states of East Malaysia (Sabah and Sarawak) have separate immigration policies and controls, as well as a unique residency status.10 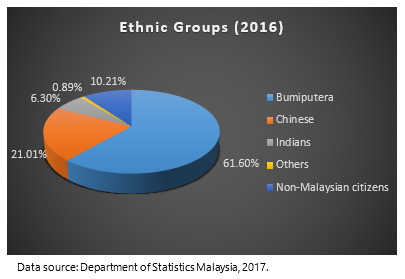 In 2016, the population in Malaysia was 31.63 million, with 28.4 million citizens and 3.23 million non-citizens. The population grew 1.4 percent, an increase from the 31.19 million recorded in 2015. The population of males outnumbers that of females: in 2016, the gender ratio is 1.07 male to one female. The Malaysian population comprises many ethnic groups. In 2016, more than 61 percent of the population were Bumiputera, which included Malays, Orang Asli, and Sabah and Sarawak natives.11

Malaysia’s services industry grew by 5.6 percent from the previous year in 2016, led by the business service, food and beverage and accommodation sub-sectors. Meanwhile, the construction industry expanded 7.4 percent, influenced by the growth in the residential buildings and civil engineering sub-sectors.14

The agriculture sector is another important sector in Malaysia’s economic development. It provides “rural employment, uplift rural incomes and ensure national food security.”17 Although the agriculture sector contracted by 5.1 percent from 2015 to 2016, largely due to the impact of the El Nino phenomenon on the palm oil sub-sector, it contributed 8.1 percent to the country’s GDP in the 2016.18 Some of Malaysia’s agricultural products are palm oil, rice, rubber and kenaf, a non-woody fiber plant from the hibiscus family used in commercial products such as textiles, ropes and furniture.19

Malaysia’s attractions include towering skyscrapers, rugged mountains, sandy beaches and cool highland hideaways.20 The Petronas Twin Towers, also known as KLCC, is an iconic 88-storey twin building located in the capital Kuala Lumpur and is a popular tourist photography spot.21 Mount Kinabalu, located in Sabah, is the highest mountain in Southeast Asia, standing at 4,095 metres and well-known for its botanical and biological species biodiversity. Malaysia is also home to many beautiful islands such as Pulau Tioman and Pulau Sipadan, which are popular among snorkelers and divers.22 Its diverse culture also makes the country a “gastronomical paradise” which attracts visitors.23

In 2016, tourism brought 26.8 million international tourist arrivals who contributed RM182.4 billion (or 14.8 percent) to the country’s GDP. This is an increase of four percent (from 25.7 million) in tourist numbers and RM 81.2 billion (from RM69.1 billion, an increase of 18.8 percent) in tourist receipts from 2015.24 Tourist arrivals in 2016 were dominated by visitors from Singapore with 13.3 million arrivals, followed by Indonesia (three million arrivals) and China (2.1 million arrivals).25 In 2020, the country targets to attract 36 million tourists and achieve RM168 billion worth of tourist receipt.26