This article provides an overview of Cambodia for those keen on exploring the possibility of living and working there. The information presented is gathered from open sources and is not exhaustive or meant to supplement or substitute legal and professional advice.

Cambodia, located on the Indochinese mainland of Southeast Asia, is a land of plains and rivers that lies amid important overland and river trade routes linking China to India and Southeast Asia. Cambodia is bordered to the west and northwest by Thailand, to the northeast by Laos, to the east and southeast by Vietnam, and to the southwest by the Gulf of Thailand.11

Phnom Penh, once known as the “Pearl of Asia”, is the capital and largest city of Cambodia. It is an economic, commercial, cultural and tourist centre.12 Battambang is Cambodia’s second-largest city and the capital of Battambang Province, which was founded in the 11th century. It is a secondary hub along the overland route between Thailand and Vietnam.13 Siem Reap is a vibrant city where the glorious 12th Century Angkor Wat temple, the largest religious building in the world and a UNESCO World Heritage Site, is located.14

Cambodia has achieved high economic growth and poverty reduction in the last two decades, mainly driven by the garment exports and tourism industries. Cambodia’s economy grew at an average rate of 7.6 percent from 1994 to 2015, ranking sixth in the world in terms of economic growth. This strong growth resulted in the significant decline of the poverty rate, from 47.8 percent in 2007 to 13.5 percent in 2014. Despite Cambodia’s achievements in economic growth and improved living standards for its people, challenges still lie ahead as the country aspires toward a more competitive economy, as well as increasing productivity, building strong and effective institutions and expanding opportunities for all Cambodians.15

In 2015, the primary industry occupied 26.18 percent of the total economy, with agriculture and the service sector at 29 percent and 39.43 percent respectively. Major agricultural products are rice, rubber, maize and cassava. The secondary and tertiary industries account for 22 and 38 percent of the total economy respectively. The major industry of the manufacturing sector is apparel products, which make up the export sector. Among the tertiary industries, tourism-related industries are highly important to the Cambodian economy.16

Both exports and imports have been expanding as a result of the high economic growth of Cambodia. As at July 2015, the exporting value was about US$5.35 billion which was an increase of more than 20.5 percent in comparison with the same period in 2014. The importing value reached a record of US$ 6.70 billion marking an increase of 17.2 percent compared to the same period in 2014. The primary export product is apparel, which accounted for more than 80 percent of total exports. The major import products are textiles, petroleum products and vehicles.17

With the aim of increasing exports and diversifying the economy, the Cambodian government launched a 10-year Industrial Development Policy in 2015, which was designed to attract investment and broaden the country’s manufacturing base. China is a major contributor under the policy as dozens of its enterprises have invested in building factories in Cambodia, especially in the Sihanoukville Special Economic Zone (SSEZ). According to the Council for the Development of Cambodia, China was the largest foreign investor in Cambodia in 2016.18 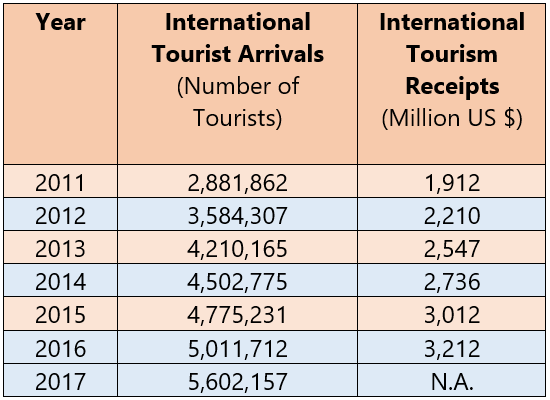 The most important service activity in Cambodia is tourism, one of the major sources of overseas investment and the fastest-growing segment of the economy. Tourism has become an important source of revenue as well as foreign exchange and has helped mitigate the effects of large trade deficits. Much of this investment goes into constructing hotels, developing resorts and enhancing facilities serving tourists visiting the Angkor Wat and Phnom Penh.19

The number of tourists visiting Cambodia has been steadily increasing, from 2.9 million in 2011 to around 5.6 million in 2017.20 The Tourism Ministry of Cambodia aims to attract at least seven million foreign travellers to Cambodia annually by 2020.21