Looking to Asia with a global mindset

This article provides an overview of India for those keen on exploring the possibility of living and working there. The information presented is gathered from open sources and is not exhaustive or meant to supplement or substitute legal and professional advice.

India is made up of 29 states and seven Union Territories. The country’s boundaries extend from the Himalayan mountain ranges to the tropical rainforests in the south. It is bounded by the Bay of Bengal to the east, the Arabian Sea to the west, and the Indian Ocean to the south. It shares a border with Pakistan and Afghanistan at the northwest. China, Bhutan and Nepal at the north; Myanmar at the east; and Bangladesh at the east of the state of West Bengal. Sri Lanka is separated from India by the Palk Strait and the Gulf of Mannar.11

India’s GDP growth slowed from eight percent in FY 2015/16 to 7.1 percent in FY 2016/17.14 In FY 2017/18, growth is estimated at 6.75 percent.15 However, the economy is expected to maintain steady growth at seven percent. By FY 2020, growth is projected at 7.4 percent.16 According to Morgan Stanley, India’s GDP could reach US$6 trillion by 2027 if it could successfully digitise its economy. It would also pave the way for the country’s equity market to be one of the five largest in the world.17

India has a large consumer market that offers abundant opportunities. It is set to become the world’s fifth largest consumer market worth around US$1.5 trillion by 2025. According to the Boston Consulting Group, India’s consumption expenditures is “expected to rise by a factor of three to reach US$4 trillion by 2025”. India’s nominal year-over-year expenditure growth of 12 percent is more than double the anticipated global rate of five percent and will make India the third-largest consumer market by 2025.” This growth is largely driven by rising affluence, with the number of those joining the elite and affluent segments of society expected to increase from eight percent in 2016 to 16 percent in 2025.18

Of the 1.3 billion people in India, one-third of them are in the 15 to 34 age group. It means there are more than 400 million young people, many of whom are tech-savvy. Moreover, there are more Internet users among them than in the United States.19

Online spending between 2014 to 2016 increased seven-fold to between US$80 million and US$90 million. The Boston Consulting Group anticipates the number of people spending online to hit 300 million to 350 million by 202520 thus providing huge opportunities in the realm of technology and e-commerce.21 Furthermore, the government hopes to grow India’s digital economy to US$1 trillion by 2022, but India’s tech firms are even more bullish by predicting that it has the potential to grow to US$4 trillion by 2022.22

India is open to help from international partners, including private participation, to achieve this mission. It offers an investment window of S$1.2 billion and opportunities for the introduction of integrated infrastructure solutions.24 There are projects worth S$16 billion planned in 33 Indian cities thus far, with opportunities open to Singapore companies”25 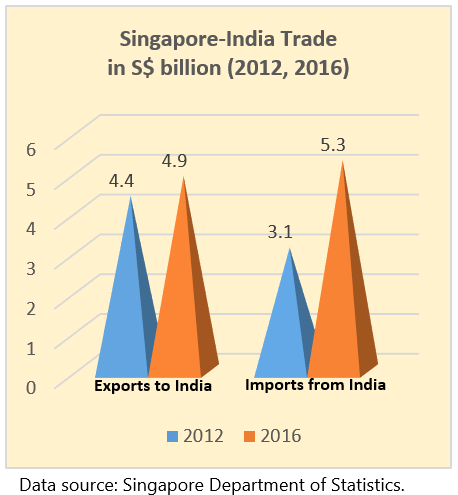