This article provides an overview of ASEAN countries for those keen on exploring the possibility of living and working there. The information presented is gathered from open sources and is not exhaustive or meant to supplement or substitute legal and professional advice.

The Association of Southeast Asian Nations (ASEAN) is a 10-nation regional organisation made up of Brunei, Cambodia, Indonesia, Lao PDR, Malaysia, Myanmar, Philippines, Singapore, Thailand and Vietnam. ASEAN was first established on 8 August 1967 in Bangkok, Thailand when the Foreign Ministers of Indonesia, Malaysia, Philippines, Singapore and Thailand signed the ASEAN Declaration.1

Since its founding, ASEAN has become one of the modern economic success stories. ASEAN’s total is population of 634 million. In 2016, ASEAN’s combined GDP stood at US$2.55 trillion, and was the sixth largest economy in the world.

The region has also seen long periods of peace and prosperity in the absence of inter-regional conflicts and impressive economic growth. Total trade has grown more than six times, from US$400 billion in 1993 to US$2.5 trillion. Poverty has declined and each country has seen its people moving from poor to low-income to middle-income levels.3

The ASEAN economy is expected to grow five percent in 2017 and 2018 as countries in the region continue to enjoy ‘robust economic activity’. For countries that are linked to the global electronics supply chain, their economies are also boosted by demand for electronics.4

In 2015, the ASEAN Economic Community (AEC) was established to promote regional economic integration. The AEC Blueprint 2025 seeks to achieve “the vision of having an AEC by 2025 that is highly integrated and cohesive; competitive, innovative and dynamic; with enhanced connectivity and sectoral cooperation; and a more resilient, inclusive, and people-oriented, people-centred community, integrated with the global economy.” It also seeks to ensure that the 10 countries are “sustainably and gainfully integrated in the global economy, thus contributing to the goal of shared prosperity.”5

Under the AEC, Singapore manufacturers can export to other ASEAN countries without having to pay tariffs for most products, thus improving manufacturers’ access to these countries. In addition, the freer flow of goods within ASEAN should reduce manufacturing and production costs due to lower costs for raw materials or inputs sourced within the region, thereby increasing the competitiveness of Singapore-manufactured goods.6 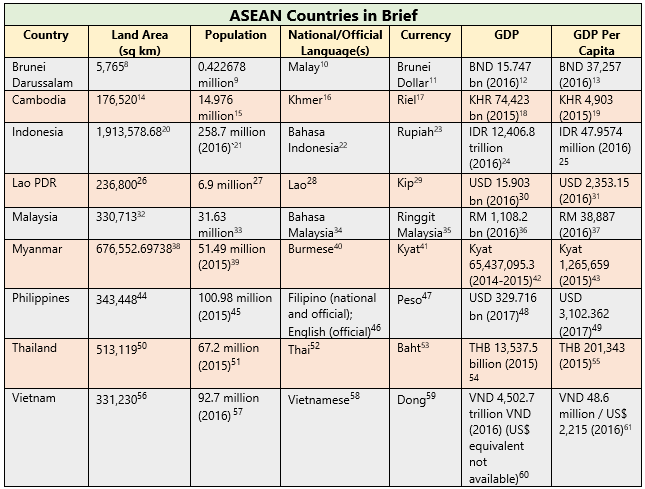